You Are Now Vanilla Bound (Week 21)

This is the third installment of my multi-segmented “Vanilla Bound” series, which details my journey through making homemade Madagascar Bourbon Vanilla Extract.  It all began with 12 vanilla beans and 24 ounces of vodka, and the last necessary ingredient for my successful Vanilla Bound venture is time (6 months to be exact).

The last time I reported on the progress of my vanilla extract was about 4 months ago (You Are Now Vanilla Bound-Week 2).  My intent was to make weekly reports for the entire 6 months, but to be honest, I was checking the extract daily and there were no notable changes taking place.  So, my impatience got the best of me, and I decided to store it and forget it, with hopes of giving it enough time to mature.

My original recipe was:  4 vanilla beans to 8 ounces of vodka

My revamped recipe is: 6 vanilla beans to 8 ounces of vodka

I began this journey with 24 ounces of vodka and 12 vanilla beans (Beanilla.com), but today I am adding 6 more vanilla beans, and back to the back of the dark cabinet it goes (for about 6 more weeks).  This is a process that demands patience (something I’m learning day by day).

What’s Going On in Week Twenty-One?

You Are Now Vanilla Bound (Week 2) 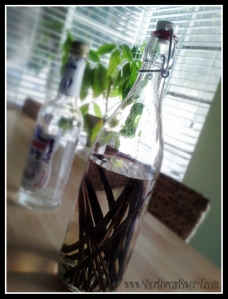 Last week I posted the first installment of my multi-segmented “Vanilla Bound” series (You Are Now Vanilla Bound-Week 1), which details my journey through making homemade Madagascar Bourbon Vanilla Extract.  It all began with 12 vanilla beans and 24 ounces of vodka, and the last necessary ingredient for my successful Vanilla Bound venture is time (6 months to be exact).

As the title states, this is week 2, but don’t worry I won’t be posting every single non-eventful week.  My goal is to capture the noticeable changes that take place in the vanilla extract process.  Also, because I have chosen a 6 month journey, I will only post about new findings and/or changes along the way.  If I don’t detect any notable changes from the week before, I’ll skip a week (until there’s something new to write about).  So if you don’t hear from me, nothing new is going on.

When I took the bottle out of the dark cabinet, I noticed that the vodka had a gradual caramel tint to it (the vodka was darker on the bottom than it was on the top), but it was still clear enough to see through. So, I gave the bottle a good shake, well it was more like a shake, rock, and tilt, but whatever it was, it was good, and that allowed the vodka to vigorously move in and around the split vanilla beans, therefore, loosening the insides of the beans and distributing the vanilla seeds throughout.

I am surprised at the development (in such a short amount of time).  Although the vodka still dominates the vanilla, there is an obvious scent and taste of vanilla.  Now I think I understand why some people conclude their vanilla extract making journey at different stages of time.  I guess it depends on how much vanilla you want in your extract, but the less vanilla you taste, the more vodka you taste (and vice versa).  Hmmm.

Check back for new posts in the “Vanilla Bound” series.  I will be posting pictures and sharing updates along the way. 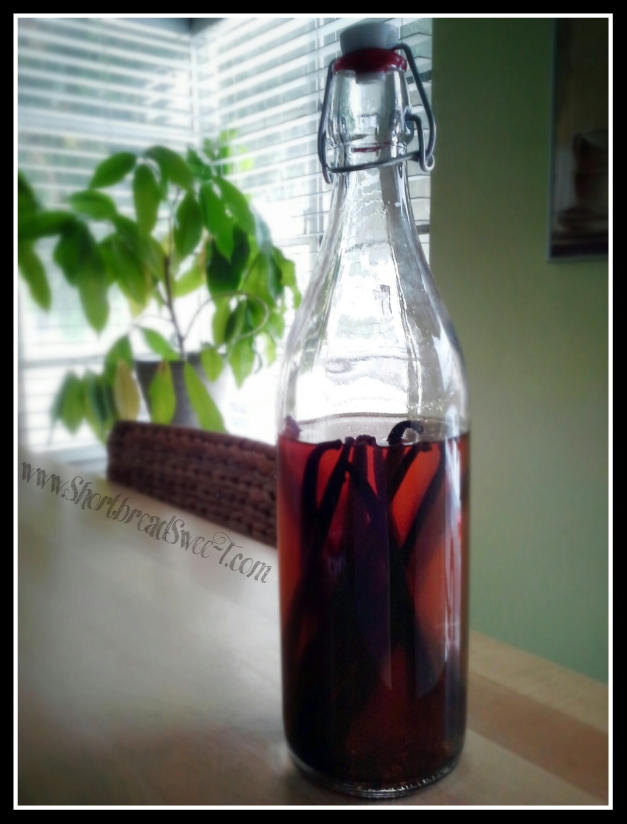 Just a crazy Mom running around the kitchen with a pinch here and a pinch there....

The Cheergerm & the Silly Yak

The life and times of a cheergerm

Baking, crafting, sewing, party planning and activities for your toddlers

Food Innovator, Recipe Sharer. My kitchen is small but mighty.

We Are Moving! We are taking a break, but we'll keep you posted here and hope to be back soon to serve you again with our fresh baked goods! We hope you continue to follow our blog!

Mild-mannered public servant by day, cake tart by night (and weekend and whenever I get the chance)!

"They're filled with magic!"

"because life is too short to eat crappy food"...Yes!Chef!

It all started with a midnight brownie...

My Adventures with Photography, World Travel and Delectable Cuisine.

A recipe without a book to be written in.

Our Beauty, Our Way

the constant moving, finding and creating of a curious traveler.

The Starving Artist
Homemade with Mess
the Goodie Plate

comfort food with health in mind

taking pleasure in all things food

Sweet bites of cake, icing and candy coating! Great for any occasion!!

Focusing on the fascinating facets of food

Confessions of an Aspiring Food Snob

Rantings of an Amateur Chef

I'm a canvas, not a diary. Don't take me so seriously.

Coffee and Cigarettes with a Bit o' Whiskey

the rantings and ravings of a pseudo creep.

How To Parent A Teen

Tips and Resources Designed Specifically for Parents Of Teenagers

cooking, baking, eating & loving every minute of it

A Personal Development and Inspirational Blog For Women

moments of escapism in an ordinary Scottish life...